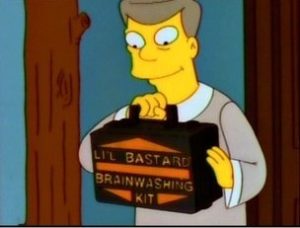 Back in the day when I originated loans in Metro Detroit, I had friends who worked at Quicken Loans and it was apparent they drank the special  Dan Gilbert flavored Kool-Aid.

It got to the point where they would meet me and others for cocktails. They would bring more and more “new” friends from Quicken. Soon, all they talked about was Quicken Loans and the glory of Dan Gilbert. They would also demean anyone how who didn’t work for Quicken Loans.

It was eerily similar to the Simpsons episode when Homer and other people from Springfield join a cult known as the Movementarians.  Bart plans to be himself with his “Lil Bastard Mischief Kit.”

However, the Movementarians outwit him with a “Li’l Bastard Brainwashing Kit.”

This was about the time Dan Gilbert purchased the Cleveland Cavaliers. As a result one of Dan Gilbert’s dark secrets emerged into the public light.  He had been arrested as part of a sports betting ring at Michigan State University back in the early 1980s.  This later resurfaced when he loaned now indicted Detroit Mayor Kwame Kilpatrick $240,000. It also grabbed headlines in Cleveland while he was trying to purchase two Ohio casinos.

Dan Gilbert’s Past As A Bookie

His spokesman claims the police officer who investigated the case is lying. Yet, stories of his roughing up deadbeat gamblers seem to pop up every time he ventures into a new business.

This proved to be interesting table talk with Quicken Loans employees at the time. They would adamantly defend Dan Gilbert. They would say, “If it’s true that he did rough them up, they had it coming for not paying up.”

“Dan had every right to do what had to in order to collect the money he was owed.”

It didn’t bother them that what he was allegedly doing at the time was illegal.

Dan Gilbert was never charged nor was he ever convicted in the sports betting sting. Why he was never charged seems to be the big mystery. However, whatever the answer was, it seemed to satisfy both the National Basketball Association and Ohio gaming officials.

Employees would call anyone who criticized Dan Gilbert or Quicken Loans as “haters”.

Former Quicken employees say they were encouraged to only hang out with “Quicken Loans Family” after hours.

People in the lending industry used to refer to them as the “Quicken Loans Cult.”

Dan Gilbert demanded his employees work insane hours. He also demanded they attend Pistons-Cavaliers games at the Palace of Auburn Hills in Cavs jerseys. Even though his subsidiary, Rock Financial was a major marketing partner of the Pistons and the Palace.

His employees showed up in droves and even paid for their own tickets because the Glorious Leader asked them to.  This blind apostolic following of Dan Gilbert explains why Quicken Loans continually ranks in the top 100 employee surveys.

Quicken Loans claims they were able to escape the financial nightmare of the past 3 years. According to an article on Center For Public Integrity, Quicken claims to be “one of the good guys.”

But what wasn’t widely known at the time, Quicken acted as a correspondent lender for various lenders.

Countrywide Financial until its demise was purchasing the majority of Quicken’s loans and then securitizing them into Mortgage-Backed Securities.

Major lenders and GSEs were eager to purchase the roughly $25 Billion in loans that Quicken originated from its marketing machine.

This is why Quicken Loans was able to escape the carnage and tarnished images of the financial crisis.  It’s not necessarily because they were “one of the good guys” as Dan Gilbert claims. However, it was because they didn’t carry any liability from the loans they originated.

Quicken did write sub-prime loans contrary to popular belief and what the Quicken Loan Kool-Aid drinkers may claim.

They just didn’t write B and C sub-prime loans. At the time, sub-prime loans were anything that did not fit into Fannie Mae or Freddie Mac guidelines. In other words, you could have a 700 credit score and be in  Option-ARMs or NINJA loan which are considered sub-prime loans.

A recent article by Michael Hudson for the Center for Public Integrity also states this claim.

“These included “interest-only” loans and “negative amortization” loans, which have been criticized by consumer advocates because they provided the illusion of low initial payments but were dangerous in the long run because they didn’t pay down borrowers’ mortgage debt. In the case of negative amortization loans, borrowers’ debt grows even as they make on-time payments.”

So now that judgments are being awarded against Quicken Loans for fraud including one last February in West Virginia when a state court had found Quicken committed fraud by misleading her about the details of her loan, charging excessive fees, and using an appraisal that exaggerated the value of her home by nearly 300 percent. The judge called the lender’s conduct “unconscionable.”

In this case, Quicken Loans initially denied any wrongdoing. A jury also found that Quicken had committed fraud by appraising the client’s property at 300% of its market value. The jury also found Quicken liable for lying to her about her Option-ARM loan. Quicken later changed their tune. As a result, threw an unnamed low-level employee under the bus for the fraud.

According to Michael Hudson:

“During the trial, an attorney for the company argued there was no evidence that Quicken colluded with the appraiser or “did anything usual or anything inconsistent with industry practice.” In a court filing in September relating to the question of punitive damages, the company described the problems with the loan as an “isolated incident” created by “mere excess of zeal by a poorly supervised, low level, former employee.””

Quicken Loans like most lenders during the boom operated like something out of the movie, The Boiler Room. As Hudson describes in his article that employees claim:

“They sat row by row in a sea of cubicles, they say, working 50- and 60-hour weeks, plugged into headsets and directed by “LOLA,” a computer program that told them which prospective customers to call. Managers stood on “The Bridge” (a nod to TV’s Star Trek), a control center that allowed them to monitor minute-by-minute what employees were doing, even, the former employees claim, listening in on calls and rebuking workers if they tried to take a coffee break or failed to follow the lender’s carefully scripted sales pitch.

One former salesman said it was as if Quicken executives were “training monkeys to sell their products to customers.” A former saleswoman described the environment as “very hostile, with management using intimidation tactics, public humiliation, and profanity when dealing with the sales team members. . . . We were berated, screamed at, and had our jobs threatened to increase our sales.””

Former Quicken employees said that a technique is known as “bruising.“

Quicken Loans employees often employed on homeowners. This technique was used to make the homeowner feel guilty or ashamed about a late payment on their credit report. Its a technique often employed by telemarketing boiler rooms.

This was often done in order to get the homeowner to trust the loan officer.

These Consultants wanted the trust of the homeowner. Then the homeowner wouldn’t question any higher rates or hidden fees after the initial application was taken.

The homeowner would be manipulated into being so thankful for receiving the loan that they wouldn’t care about paying extra fees and/or higher rates.

An email was also sent to employees telling them to limit the amount of information they give to a client:

Employees from Quicken Loans also claim that they were instructed to lie to homeowners and falsify income. Thus, in order to make a deal work.

Graham and Janet Higton of Arizona claim in a federal lawsuit that Quicken inflated their monthly income to $8000. He then steered them into an Option-ARM loan which they didn’t understand.

Quicken Loans denied any responsibility. According to Hudson,  Quicken describes some of the couple’s claims as “sheer nonsense” and says that the Higtons are attempting to “manipulate the system.”

Employees have come forward to say they were expected to work 50-60 hours a week.  If the lawsuit is successful, it could cost Quicken between $10-30 million.  Paula Silver, Quicken vice president of communications, said in a prepared statement that “Quicken Loans has won several key victories since this weak claim was filed early last decade. The company remains strongly committed to defending this meritless claim where we expect to defeat this self-serving plaintiff law firm’s parasitic action.”

Quicken also claims the employees did not qualify for overtime pay.

The company claims consultants provide expert financial advice to borrowers in much the same way that stockbrokers advise investors. Quicken also stated wmployees are salaried and commissioned workers who are exempt from overtime laws.

Of course, this is all bullshit.  I’ve worked for brokers and lenders and you still have to pay overtime. Everyone in the industry knew Quicken’s loan officers were nothing more than order takers. They then passed the loan on to processors in an assembly line fashion.