Loan auditors like Steve Dibert said it’s been tough getting documents from a lender. He has launched investigations involving Wachovia, Hudson City Savings Bank in New York and more than a dozen loan modification companies. 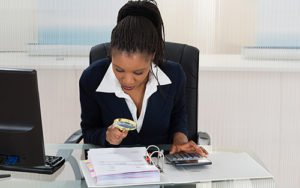 Amid growing efforts to help homeowners avoid foreclosure, loan auditors are elbowing for a seat at the table.

Attorneys and homeowners hire the companies for $500 to $1,000 to comb through mortgage documents for questionable disclosures or improper fees that could be used to delay or prevent foreclosure. And some loan auditors say they will trace ownership of a loan note. The document is critical, because, without that paper trail, a lender can’t foreclose.

“They are the latest cottage industry to spring up because of the housing and financial downturn,” said real estate and foreclosure attorney Roy Oppenheim of Oppenheim Pilesky in Weston.

How many auditors exist isn’t certain, and the companies aren’t licensed or regulated. As for their services, no one seems able to agree on how useful audits are.

Oppenheim says at some time he may use an auditor. But for now, his clients don’t want to spend the money.

“We get hired to handle a foreclosure, not a counterclaim against the bank,” he said.

On the other hand, defense attorney Peter Ticktin of the Ticktin Law Group in Deerfield Beach said he believes fighting the banks on behalf of his clients is exactly why auditors are essential.

Ticktin set up Florida Mortgage Auditing about nine months ago. Audits of loan documents in about 1,000 foreclosure cases since then have revealed problems in almost all of them, he said.

The ultimate proof that the audits are successful will come in stopping the foreclosures. That hasn’t happened yet but lenders have been required to substantiate fees and the investigation have resulted in other findings. Several of the cases being litigated and are currently in discovery. That’s a sign of progress, Ticktin said. “We haven’t lost yet.”

But attorney George Castrataro in Wilton Manors said he has yet to find an auditing company that doesn’t have what he believes in a conflict of interest by being involved with attorneys or real estate companies. So he’s hired mortgage brokers to review about 20 to 30 loans so far.

Ticktin says Castrataro is “being silly.”

Ticktin has a liaison to the auditing firm within his offices but the actual auditors are outside the office.

He says if the loan auditors worked for the bank, that would be a conflict of interest. But the loan auditors are rendering a legal service to Ticktin and giving him the legal information he needs to oppose a motion for summary judgment or otherwise pursue a case.

But loan auditors who deal directly with the public are practicing law without a license, Ticktin says.

Lender Time Frederick, president of the Mortgage Bankers Association of the Gold Coast in West Palm Beach, Described loan auditing companies as a “new gimmick” that can be construed as helping people but that also capitalizes on the financial crisis.

Some auditors stretch claims of how effective they are, Oppenheim said. Some contend they track ownership of mortgage note through a the complex securitization process – something a lawyer would go through a court-ordered discovery.

And auditors have been involved with loan modification companies that illegally charge upfront fees in attempts to prevent foreclosure, he said.

Auditors fall under the definition of “foreclosure-related rescue services” and, if fees are demanded upfront, can be sued by the state under the state’s Foreclosure Rescue  Fraud Prevention Act.

A Florida Bar spokeswoman said loan auditing companies had not yet emerged as a concern. But the Bar has posted an ethics alert about loan modification companies, which often work with loan auditors.

The alert warns lawyers that they can’t provide legal services for a homeowner while working as in-house counsel for a non-lawyer company, pay referral fees to non-lawyers, divide fees with a non-lawyer or be paid by a non-lawyer for services to distressed home owners.

In March, state Attorney General Bill McCollum sued Lincoln Lending allegedy charged $2,700 for a forensic analysis to determine errors or fraud in customers’ original mortgage or closing documents. The company would charge a second fee of $999 to modify loans.