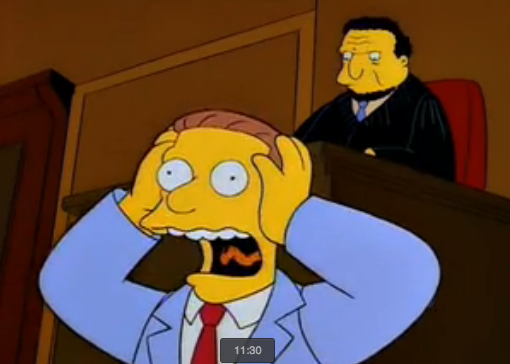 I receive phone calls daily from frustrated homeowners. They can’t understand why the judge won’t listen to their arguments. It’s because they haven’t listened to Foreclosure Defense 101 Lesson 1.  Don’t do it!

Homeowners think they are Clarence Darrow. They want to argue that their foreclosure is a violation of their civil rights or other crazy theories.

Homeowners troll the internet and think crazy conspiracy theories are base on the law. They read case law from one state and think it applies to them. Trust me, I have heard it all.

I know you’re ticked off because the economy sucks and you’re losing your home. However, you’re not Alan Dershowitz.  You’re not an attorney and you don’t have a background in Constitutional Law or court procedure.  So don’t pretend to be Alan Dershowitz when you go in front of the judge and attempt to argue that your foreclosure is a violation of your civil rights. You will end up looking like Lionel Hutz from The Simpsons.

First of all, you are going in front of a guy who has to listen to countless other people with the same delusions of grandeur.

The judge has heard the same argument from countless other people. He is probably as ticked off as you are.

The judge just wants to go home or go play golf. He could even want to go to the nudie bar. Anything to get away from pro-se litigants.

Secondly, homeownership is not a birthright in this country. It’s a privilege. So consult an attorney before you decide to play an amateur lawyer or spout Marxist dogma to a judge.

What most attorneys do to buy their clients time is to question the Trustee’s lack of standing. You need to make sure you know what you are talking about before you argue it.

It also helps if you have the Trustee’s name spelled right.  For example, it’s Deutsche Bank.  Not Deatche, Deutch or Deutsch.

I had a potential client in New York spell it “Douche” when he had the bright idea to play amateur lawyer.

I don’t know if he was trying to be a wise ass or if he just didn’t know how to spell it. The overworked judge never caught it and neither did the foreclosure mill attorney. This particular judge would have had a fit if he caught it.  The homeowner also could have created more problems for himself.

Foreclosure Defense 101 Lesson 1: Don’t Expect Millions OF Dollars In A Settlement Or A Free House.

Homeowners who play amateur lawyer think they are entitled to a big cash settlement and a free house. The reality is they are not. MFI-Miami and our lawyers have gotten the mortgage nullified. However, it’s only about 20% of our cases. Most homeowners get a modification with a principal write-down.

Homeowners think they will get a free house simply by stating the lender is unable to show ownership of the note. The judge is going to say prove it!

Also,  the “wet ink signature” argument only works part of the time.  It’s one of those urban legends that was spread around the internet by foreclosure activists. Yet, countless people who believe everything they read on the internet. They insist on arguing it only to be slapped down by the judge. Judges are sick of hearing this argument, especially in Florida.

So unless you want to be living in a cardboard box under the expressway, you should consult with an attorney.  There are easier ways to make the lack of standing argument but you need to show evidence to support your claim.